We will hold the meeting “Swords of the Renaissance” here in Potsdam for the second time on Saturday and Sunday , October 16 & 17, 2021 This event is dedicated to the different styles and weapons of the Renaissance. This is intended to provide an overview and provide space for exchange and experimentation.
The Event will be held in english and the workshops will be recorded and later published on youtube.

There will be 6 short workshops and presentations by invited instructors from different groups in Germany / Europe on their areas of expertise. There is also plenty of time for questions, discussions, exchanges and free training / sparring!
The aim is to create an open space that reflects both the diversity of the historical martial arts between the 15th and 17th centuries and the diversity of today’s practitioners. From the elegant movements of the Italians (Bologna), the deep stances of Fabris, the sporty demands in Germany (Meyer), the dancing forms of the Spaniards (Destreza), the space-creating presence of the Portuguese (Montante) to the grumpy Englishmen (Silver! – not our instructors… they are wonderful – not grumpy!) and many more.
The participants have the opportunity to deal with weapons and styles that are unknown to them by talking to the specialists in conversation and hands-on.

“Fencing from the bull (Meyer Dussack)” 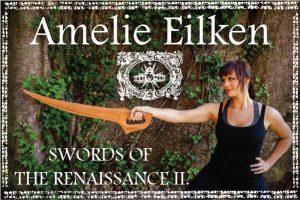 Amelie Eilken started historical fencing in 2014. Her main focus in fencing is on the treatises of Joachim Meyer from the late 16th century. She is a founding member of the Meyer Class – of the training group as well as the YouTube channel) and has been training the Meyer Class Hammaborg Women since 2019. Even before her official appointment as a trainer of Hammaborg she has been conducting workshops at national and international events, weapons so far include the long sword, the dussack and the halberd. She is also one of the main organizers of the sHEMAsters event in Berlin and the Hammaborg – Historischer Schwertkampf e.V. Open Hall tournaments. 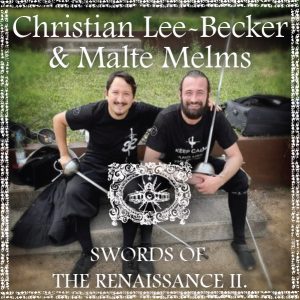 Cuadratura del Círculo is a joint project in the field of historical martial arts by Malte Melms and Chris Lee-Becker to promote and research La Verdadera Destreza (henceforth LVD), the Spanish tradition of historical martial arts of the early modern period. Their main focus is on making LVD known for the German-speaking area, as very little literature is available in German so far. In terms of content, they particularly want to shed light on the differences and similarities between two authors from the 17th century, Gerard Thibault d’Anvers and Francisco Lórenz de Rada, and investigate the extent to which Thibault actually belongs to the Spanish tradition.

“Fight like a Noble: bolognese sidesword at the Italian court” 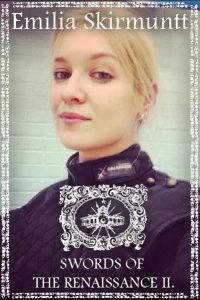 Emilia Skirmuntt has trained how to hit people with swords and other objects for the last 19 years. During that time she has studied multiple weapons, systems, and in multiple different clubs, starting in Poland and then moving to London and Oxford. She has won medals in both women as well as open competitions both in the UK and abroad, fighting with longsword, rapier, rapier and dagger, saber, sidesword, and sidesword and buckler. She was also voted best technical fencer of By the Sword 2019. Emilia travelled around Europe leading workshops and seminars and was one of the representatives for the UK and Ireland HEMA team in the European Games taking place in Minsk in 2019. She is a member of the organising committes for the Wessex League, and Albion Cup, the biggest international competition in the UK. She also organised English Sidesword Open In Oxford in 2018.
Currently she is the head instructor for the Oxford Chapter of The School of the Sword. She teaches Italian longsword, dagger, rapier, sidesword, unarmed, and tomahawk techniques. 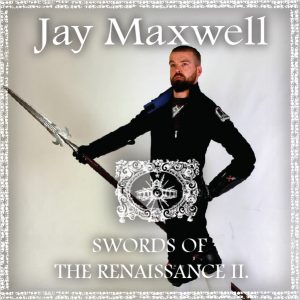 Jay Maxwell has been studying and practising as a martial artist for over thirty years, switching his focus to Historic European Martial Arts (HEMA) in 2004. He regularly teaches at high profile international events and in his competitive years was one of the top ranked HEMA fencers in the world. Starting his training in London and Oxford in British systems of swordsmanship, he quickly came into contact with the Italian schools and was taken by their elegance.
Jay organises the English Sidesword Open (ESO), started in 2018 and becoming one of the most successful British HEMA tournaments with the largest amount of sponsorship ever accrued for a competitive HEMA event. The ESO has included seminars and workshops with TV personalities and world leading authorities. He is on the panel for the European Sidesword League, a development and expansion of the concept of the ESO, and has had the pleasure of seeing numerous former students compete at a high level.
Jay has primarily focused on the 16th through 17th century north-Italian combat methodologies and the influence these have had on the martial systems of the Holy Roman Empire. He is frequently to be found downstairs in the library at the Royal Armouries Wallace Collection transliterating or translating old fencing manuals. He runs displays, seminars and workshops on Historical combat practices, consults on curation at museums and private collections, and is a member of the Royal Armouries Arms & Armour Society and UK Coaching. 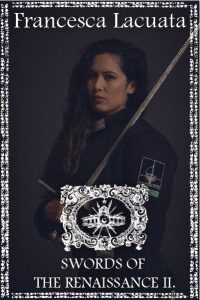 Fran Lacuata is lead instructor at The School of the Sword’s Godalming chapter, having studied Bolognese swordplay and rapier since 2010. She has a further interest and experience in renaissance dagger-fighting, Bartitsu and longsword. Fran has instructed at high-profile events in Britain, Europe and the US; and has placed in and won a number of international tournaments.
As a writer, Fran has demonstrated, panelled and presented on historical fencing and real-world violence at lectures and writers’ conventions, including Fantasycon and at the Wallace Collection.
She was a main organiser of the International Rapier Seminar 2016; co-founded Waterloo Sparring Group in 2012, which facilitates inter-group sparring from clubs all over the south of England and beyond; is a founder of the Wessex League series of events; is a key organiser of the Albion Cup; runs the Spring Sword Workshops and Swords of Winter events; organises By the Sword – an annual women’s event running since 2017; and was a founding member of Esfinges, a worldwide organisation for women in HEMA. 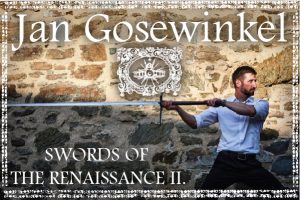 Jan Gosewinkel startet with martial arts 30 years ago, when entered the local Jiu Jitsu club (2. Dan). 15 years later he picked up the sword and studied Liechtenauer Longsword and Short Sword (a.k.a. “halfswording”) in several different clubs in Germany and Austria. Since 12 years, Greatswords are his special interest and since 2012 he teaches classes on Montante, Mangual and Double Swords on a regular basis.
He supports “The Spadone Project” in active research and translated all known Spanish teachings for the Montante into German language.

The participation at the event will be free of charge, but you can contribute via donnation for subsidizing the various costs. (eg. travel funds of the instructors, etc.). 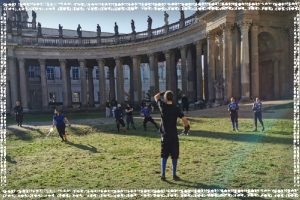 TBA – If the weather is good, the event will held outdoors and will be open to spectators. If it rains we move into the hall and stay among ourselves. 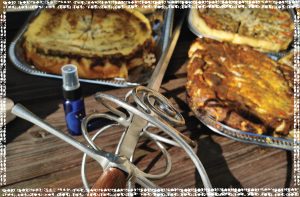 A lunch buffet and beverages like last year will be provided. It will be 15 € per day. Alternatively, there is a supermarket in walking distance to the venue. The tapwater is perfectly drinkable, as well.
On Saturday evening we will go for dinner together in a wonderfull traditional persian family resturant in the Potsdam city center.

In terms of weapons, everything is welcome that can be moved in the style of the Renaissance masters (if you move your Dane axe according to Figueiredos rules, or Manciolinos primo assalto for the buckler with viking shield and sword… fine). In the evening there is even room for “weapons for a more civilized age” like last year.
Due to the corona situation, to finance the location and the organization via the university sports, a fee may be due, but there are drinks and a lunch buffet. Unfortunately, the number of participants is therefore limited (~ 30-40 spaces will be available).
There is no tournament or other kind of competitive scenario at this event. The common denominator is cooperative and friendly fencing enviroment. So heavy sparring equipment is not necessary. Nevertheless, it is advisable to bring the appropriate equipment with you to have the opportunity to test your techniques under a little more pressure.
Masks, neck protection and (light) gloves belong to the minimum to be able to safely participate in all workshops. A fencing jacket is also pleasant, especially in thrust-oriented workshops. 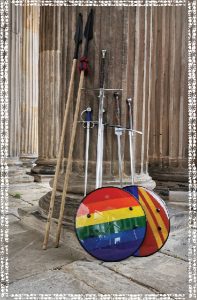 The Swords of the Renaissance, organized by the Schildwache Potsdam – Berliner Rittergilde, should be a safe space that offers a constructive atmosphere in which everyone can feel comfortable and in good hands.

Therefore, all participants, instructors and organizers as well as all helpers are expected to behave respectfully and to adhere to this code of conduct at all times. Anyone who shows discriminatory or harassing behavior will be excluded from the event. This includes – but is not limited to (!) – discrimination in relation to origin, gender or gender identity, sexual orientation, ethnic or religious background, as well as all abilities of a person; also verbal, physical and sexual harassment. Any behavior that suggests racism, homophobia, sexism, transphobia, bullying etc. will not be tolerated in any way, as will membership in fascist groups, wearing fascist symbols or insignia and / or spreading fascist beliefs. This includes – but is not limited to – “white supremacy”, neo-Nazi, “alternative rights” or homophobic / sexist / trans-exclusive ideologies.

It is your responsibility to ensure that exercising and spending time with you is the most enjoyable experience possible for everyone involved.

Everyone is encouraged to adhere to these rules. Disregard or non-compliance can lead to exclusion (without refunds) from the event. If anyone – including instructors, organizers and helpers – shows behavior that violates these rules or makes your stay uncomfortable in any other way, please contact one of the organizers so that further steps can be taken. If you have any questions about any of the items listed here, please don’t hesitate to do a quick research and / or ask us. Understanding is fundamental to respect. In general, when in doubt, err in favor of respect!

The registation is closed – and link to the companion facebook eventpage here.

Here you can add yourself to the waiting list, and you will be informed when new places get available.
Questions via email: info@schildwache-potsdam.de
13. August 2021
Aktuelles Events keine Kommentare Stephan Eickelmann